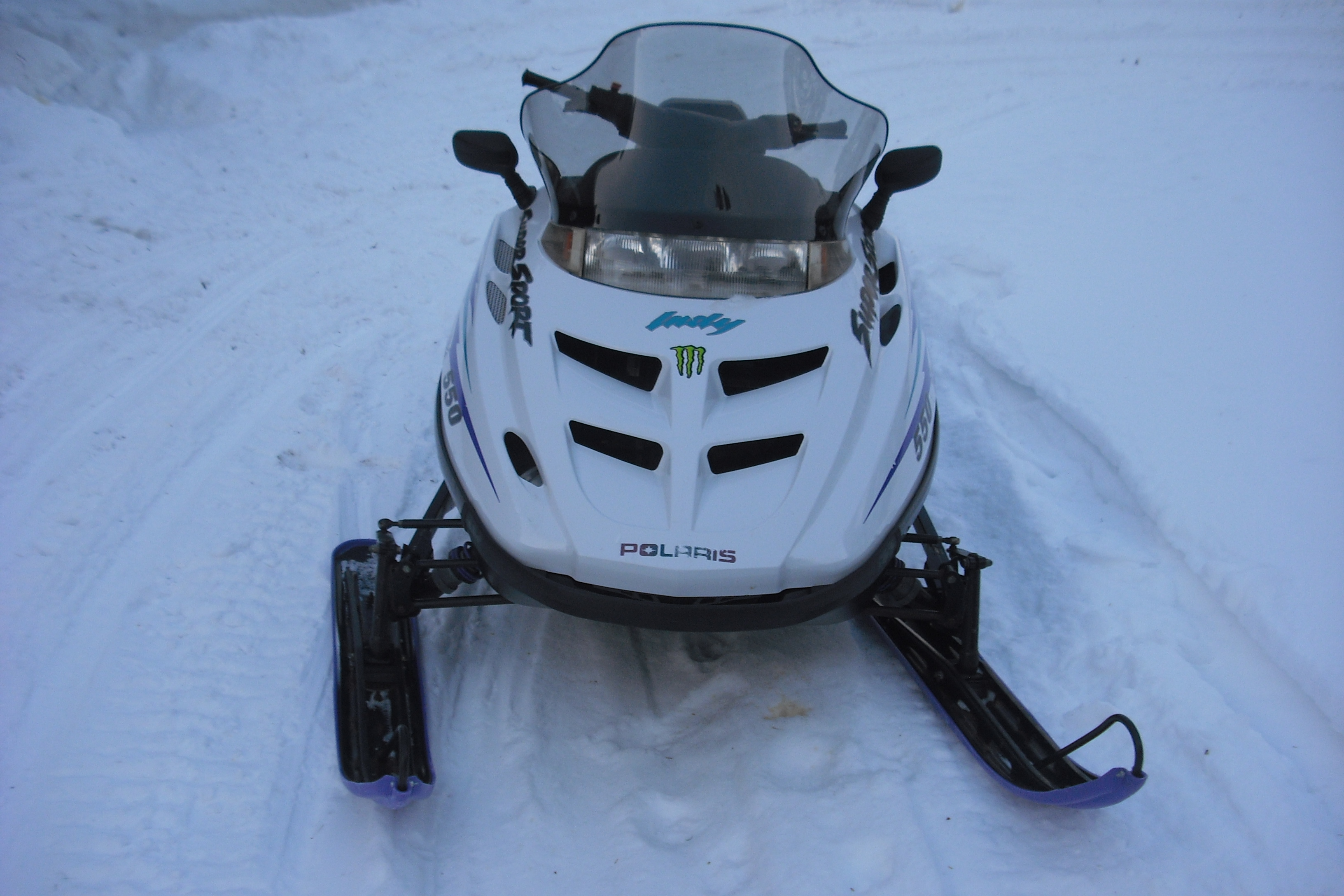 TRAIL NETWORKS:  Throughout the seventies and eighties a vast network of groomed trails had been created.  Advancements in grooming technology had made weekend rides far more enjoyable.  Gone were the old box mattresses towed behind snowmobiles, now there were Tuckers and Bombardiers specifically designed to groom snowmobile trails and drags designed to shave off the moguls and lay down a beautiful flat pan to ride on.  This new and vast trail system begged for a new era of snowmobiles and the manufacturers were about to provide them.

SUSPENSIONS:  After numerous missteps by the manufacturers in the 1980s, the proper balance of weight, performance, power and price were about to be met.  The biggest advancement could be traced back to the racetracks of the late 1970s and the development of Polaris’ trailing arm Independent Front Suspension.  The introduction of the Indy in the early 80s changed snowmobiling forever and after experimenting with multiple suspension systems the Indy IFS reigned supreme.  In 1991 Polaris became the first manufacturer to have a 100% IFS fleet. After 30 years, the leaf spring suspension’s days were numbered. This made snowmobiles much more comfortable to ride and easier to control and tailor made for the new trail system, the Indy line exploded and absolutely dominated the 90s.  During the decade Arctic Cat would continue developing their A Arm wishbone suspension and would have it perfected by the turn of the new century and, just like the trailing arm killed leaf springs, the A Arm would put an end to trailing arms.  Better front suspensions combined with ever improving rear suspension designs made snowmobiles more comfortable and easier to control and led to a huge increase in sales, but suspensions weren’t the only thing that fueled the second golden era of snowmobiles, the models themselves were beginning to change.

PURPOSE BUILT:  In the early days the snowmobile was designed as a go anywhere do anything type of machine.  The idea behind the snowmobile initially was to be a gasoline powered version of a dog sled, in fact the original name of the first Ski-Doo was Ski-Dog and it was billed as the “motorized dog team.” Believe it or not the snowmobile was simply designed as a utility vehicle, Joseph Armand Bombardier’s brother, Alphonse-Raymond, however, thought the Ski-Doo was “fun” to ride and saw it more as a recreational vehicle.  This mindset later transferred over to the Ski-Doo dealers who found that people were buying the Ski-Doo more for fun than for work.  Joseph Armand felt that concentrating Bombardier’s production efforts on the Ski-Doo didn’t make financial sense but as sales of the Ski-Doo doubled year over year it became apparent that the Ski-Doo had changed the way people experienced winter.  Bombardier developed snowmobiles strictly for work like the twin tracked Alpine and models for the family like the Olympique and as performance and power became important to the dads of the world they developed the T’NT.  This diversity gave Ski-Doo a huge edge in the early days but as the seventies wore on more and more emphasis had been placed on power and performance of snowmobiles and their diversity suffered. As experiments and missteps took place in the 80’s it became evident that things had to change.  There was no longer a one size fits all snowmobile, people wanted their sleds to do specific things and it became obvious that there were different segments of the snowmobiling population that needed to be addressed.  With the new trail system, performance based sleds were a no brainer and the manufacturers easily filled that segment, but there was still a group of people out there where the moms and dads wanted to take a nice ride on the weekend or load up the kids and go for a family ride.  The manufacturers again looked to the past and saw that snowmobiling developed as a fun family sport so they retraced their steps and Ski-Doo and Arctic Cat released the first purpose built two-up touring sleds in the early 90s and the other manufacturers soon followed.  Rebuilding this family oriented atmosphere helped improve sales and the manufacturers began looking in other areas of the snowmobile world to find inspiration.  They noticed that a hugely popular trend were utility companies and others that had serious work to do were buying up old twin tracked Ski-Doo Alpines so, logically each manufacturer developed a line of utility sleds designed solely for doing hard winter work.  Another trend taking place were scores of snowmobilers buying 80’s era Yamaha Phazers to ride in the mountains, the Phazer’s light weight and good floatation made it a mountain staple.  Seeing an opportunity to capitalize on consistent mountain snow, Ski-Doo engineers came up with the idea of building a lightweight mountain specific snowmobile and in 1994 the Ski-Doo Summit was born.  With huge sales numbers the Summit was followed by the Arctic Cat EXT Powder Special in 1995 and then by the Polaris RMK in 1996.  By building a fleet of purpose built snowmobiles sales skyrocketed to levels not seen since the 1970s.

SNOW: The final piece of the puzzle is the simplest one of all, SNOW.  The one constant throughout snowmobile history is that when the snow is good, the sales are good, and with the Midwest snowmobile states of Minnesota, Wisconsin and Michigan getting pounded by early season snow starting on Halloween of 1991, the decade was set for ten years of prosperity.  The 90s brought some truly epic snow years and this combined with improved technology, improved models and a stable economy, snowmobiles experienced their second golden age. 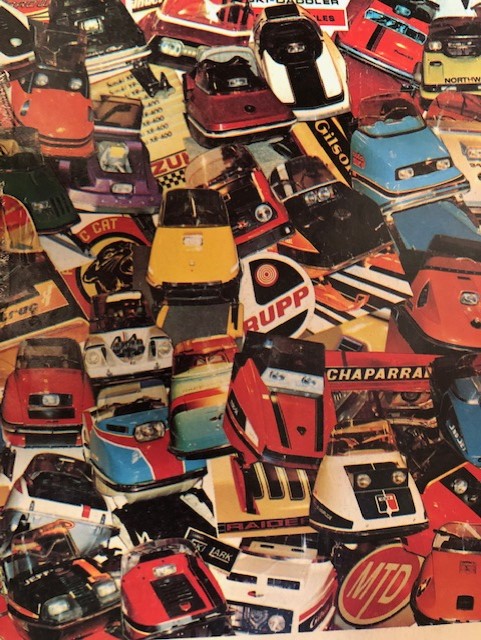 Hello everyone!  It’s November and for us here in Northeast Minnesota that means snow can be on the ground any day now!  Of course the Grant-in-Aid trails don’t open until December 1st but it is still exciting to see the flakes in the sky!

Recently my next door neighbor celebrated his 90th birthday and, knowing that I am a huge snowmobile fan, he recounted to me about how the entire neighborhood was snowmobile crazy in the late sixties and early seventies- the first Golden Age of snowmobiling.  There is a large old farm field behind my house that borders the property of 7 households and my neighbor said that at one point every single one of those households had at least one snowmobile and some of them had several and they would all hit that field night and day, snowmobiles buzzing everywhere.  That was a pretty common scene in the late sixties and early seventies, in fact from 1970 to 1974 snowmobile sales topped 2.2 million machines, an average of 453,000 snowmobiles a year.  Snowmobile brands were as plentiful as Crayola crayon colors.  Imagine getting the yearly snowmobile buyers guide and having fifty brands to read about.  It seemed at that time that snowmobiling would continue to flourish, so what happened?

By 1974 huge changes were taking place in the snowmobile industry- federal standards were put in place regulating sound decibels and exhaust standards, these were followed by numerous regulations on where a person could ride and enforcement of private property rights.  At this time a small and disorganized trail system was all that existed, most trails just followed powerlines or old logging roads or trails people used to get to their cabins both in summer and winter.  Grooming and trail maintenance was in it’s infancy with old box spring mattresses towed behind a snowmobile as the top grooming method for trails.

With tail riding conditions poor at best the public was clamoring for better suspensions and more power, this, combined with the technology needed to comply with new regulations resulted in the cost of a new snowmobile beginning to rise.  No longer was a snowmobile an item you could buy for less than $1,000.  These price increases and rising product development costs made many of the weaker companies pull the plug on their snowmobile business.  But more severe blows to the industry were on the way.  Rising gas prices and gas shortages of the late seventies, combined with less places to ride and a string of really poor snow years, rising inflation and a faltering economy forced many companies into bankruptcy and one by one the snowmobile manufacturers who at one time numbered over 100 dwindled to just a handful, but the problems didn’t stop there.  As the eighties approached and companies were experimenting more and more with trail performance they forgot about one major thing- a snowmobile needs to be able to travel in the snow!  With the emphasis on power, speed and comfort on the trail, owners of new machines soon found that going off trail resulted in an endless amount of digging and the once versatile machine of easy snow travel that had been created in the sixties was now a lumbering tank that couldn’t move in deep snow.  By the mid-eighties the number of manufacturers dropped to the four we have today and during that decade each of them flirted with the possibility of being out of the snowmobile business altogether.

As sales hit rock bottom with just over 100,000 machines being sold in 1986 it was evident that something had to be done.  The thing that did come out of the seventies and eighties was that the manufacturers learned from their mistakes and also capitalized on their successes and a new breed of snowmobiles were about to hit the market.  With an economic recovery and the dawn of successful technology along with everyone’s best friend- SNOW the 90s were about to usher in the next great era of snowmobiling.  A once nearly dead sport was about to take center stage once again and it all started in 1991…