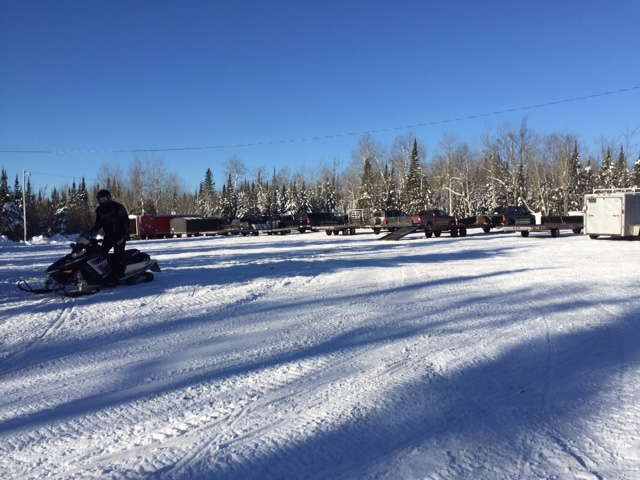 We got out for the first “official” ride of the season on Saturday on our old standby, the CJ Ramstad North Shore State Trail.  We left Duluth from the Martin Road Lot to find that the first section of trail had not yet seen the groomer, the trail was icy and mogul filled and it looked at first like the day was going to be rough. We soon were pleasantly surprised when we crossed the Jean Duluth road to find a freshly groomed trail that we had the privilege to be the first to lay down fresh tracks.  From there it just kept getting better. I honestly have to say that the trail was in mostly amazing condition for the rest of the ride and the groomer operators get kudos from us for doing a mighty fine job on the trail, and when we say amazing condition we are talking about the kind of riding where you are high fiving your buddies at the end of the day for one kick ass day of riding.  on the flip side, however, we must mention a few things that were less than ideal that you need to keep in mind before blazing down the trail:  First is overhanging brush.  This was a major issue for us.  The early heavy wet snow meant that there were many small trees and bushes that had been forced onto the trail by the weight of the snow. Since we had not been on the trail yet this year we took it pretty slow as we didn’t know what may be around the corner and even then it was too late to avoid getting your helmet tagged by overhanging brush.  Also many riders rode around the brush which forced them into the wrong side of the trail setting up near collisions with oncoming sleds.  I almost hit a fellow rider for just this reason, luckily we avoided each other but it could have been bad- be aware of this as you don’t know when  you will go around a corner and find someone in your lane- I f I had been going at a normal rate of speed I may not have been able to avoid the other sled, it was only my reduced  speed that kept me out of harms way.  Either option would have been bad- hit a huge overhanging tree or hit another sled- not good choices.  The second reason we advise caution is that there are a number of muddy washouts on the trail where there usually aren’t.   Couple this with ice created by small streams and swamps that are usually frozen solid and you have some potential dangerous situations- I watched one sled hit an icy patch on a hill and suddenly he was going down the trail sideways, luckily he didn’t roll his sled or hit anyone else but again this was only avoided because of our reduced speed. 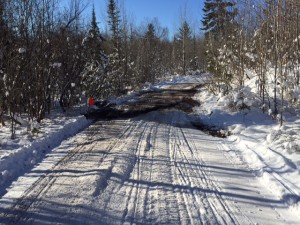 Washouts like this are plaguing the trails this year, so extra caution is needed

We can’t stress enough that even though the trail is groomed, there will be sections that are not  in prime condition and could cause major problems if you are going to fast- simply put- don’t ride like an idiot.  Be safe, be cautious and get home in one piece. 99.999% of the trail is in great shape- but that .001% is out there and can ruin your day quickly.  Second of all, any lakes that you run across are probably not safe.  We heard of one moron who was ripping across a lake that was open water just two days earlier.  Ask a local before heading out on any ice.  We were also pleased to see a few of the GIA trails open for business- but for every one of those there were two that are still shut down for lack of frozen ground.

Overall we were thrilled with how the ride went and were happy to see a ton of sleds on the trail, many were traveling in big family groups. In my opinion there is nothing better than seeing mom and dad and the kids all on sleds.

This week we are hoping to pick up some more snow and with the recent freeze we are crossing our fingers that we can get some more of the GIA trails open by next weekend.  As always, we will keep you posted.