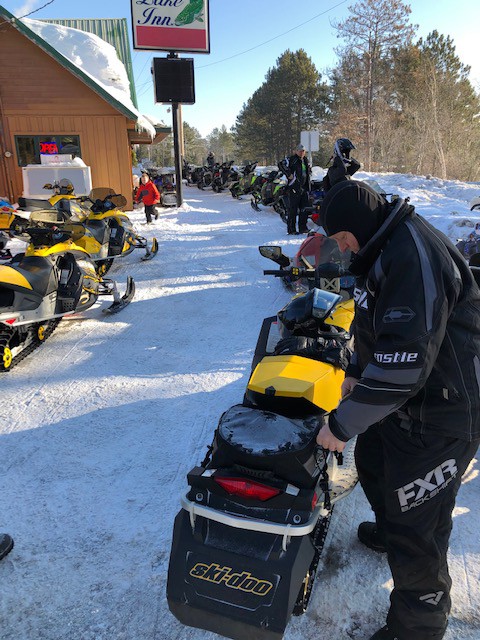 February 22, 2020 marked the tenth Annual Yeti Tour charity event which benefits the Northland Newborn Foundation, a charity to help parents of children that are born prematurely or with complications.  The money raised by this event stays right in the Duluth area to help local families.  Since its inception in 2010 the event has continued to grow and has raised over $250,000.

As with any snowmobile charity event you are at the mercy of the weather and the Yeti Tour has seen more than its fair share of poor conditions.  Yeti Tour 1 in 2011 had perhaps the most ideal conditions of all- back then it was a two day event and the temps both days were in the 20’s with plenty of snow and excellent trails.  Yeti Tours 2 & 3 had the riding portion of the event cancelled for lack of snow.  Yeti Tour 4 in 2014 was the coldest event in the tour’s history with riding temps bottoming out at -20 degrees Fahrenheit. After that, the Tour date was moved to late February.  Yeti Tour 5 was run in low snow conditions but was still able to take place, Yeti Tour 6 took place in the rain, Yeti Tour 7 saw record high temperatures with the thermometer topping out at 60 degrees, Yeti Tour 8 was again plagued with rideable but low snow totals and finally Yeti Tour 9 went off with perfect temperatures and perfect trails.

So what would Yeti Tour 10 give us?  Leading up to the event things looked promising with some of, if not the best trail conditions Northeast Minnesota has seen in over 10 years, but, as luck would have it, the day of the event ushered in the warmest day of the year so far.  Things started out well as the record number of riders (70) gathered at the Island Lake Inn for the pre-ride check in.  At 9:00 the temperature was a comfortable 21 degrees and the ride kicked off with various groups of sleds leaving together. This is where the Yeti Tour differs from other organized rides as the groups mesh together based on riding style/ friends etc., everyone picks a group to head out with and then things settle in from there.

For the third year in a row I was riding with my buddy Allen and for the second year in a row we hooked up with Legendary Yeti Rider Dave Cannon who was riding with his friend Dale. Once Dave met us in the staging area we headed out across Island Lake to the Reservoir Lakes trail.  The trail was already showing the effects of heavy weekend traffic but all in all it was relatively smooth.  We passed several groups of Yeti riders and settled in to a quick pace.  We reached the iconic CJ Ramstad North Shore Trail and were greeted by a fresh flat pan put down the night before by the Drift Toppers snowmobile club out of Duluth, then it was on to the beautifully groomed Pequaywan trail which led us to the Pequaywan Inn for Lunch.  At the Pequaywan we found that there was one other group of Yeti Riders still ahead of us and they had elected to go on to Hugos before taking a break.  Dave, Dale, Allen and I filled up on burgers and fries before hitting the trail again and by the time we left, the Pequaywan Parking lot was jammed full of sleds and the bar was now overflowing with riders. 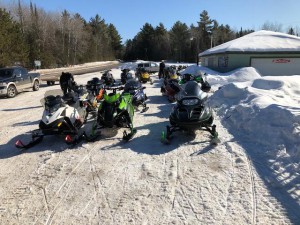 After taking a few pictures of the throng of sleds we maneuvered our way back onto the Pequaywan Trail and rode to the equally mint condition Brimson Trail which led us to Hugos for refueling.  Hugos was packed with non-Yeti Tour riders who were just out enjoying the excellent conditions and for the rest of the day we experienced a heavy amount of traffic from riders taking advantage of the perfect trails.  The group that was still out ahead of us were headed to the John A. Brandt Memorial Shelter on the Yukon Trail which has become a favorite destination for the Yeti Tour Riders since the route changed for Yeti Tour 4.  We maintained a quick comfortable pace all the way to the Yukon Trail which also had been freshly groomed the night before and from there it was up to the shelter where we finally caught up with the Lead Yeti Tour Group.  We hung out at the shelter for a while with the ever growing number of riders, some of whom were enjoying the 40 degree temps by roasting marshmallows and making smores over the fire.  The four of us decided we would head north for a while and enjoy the Yukon before doubling back to the North Shore Trail and heading home.  Once we made it back to the North Shore Trail the temperature had risen to the high for the day of 43 degrees and we had to take off some layers and open up jacket vents to keep cool.  The snow had become soft and started clumping together and the sleds were starting to run a little warm from lack of snow dust getting kicked up to cool the heat exchangers, now we were rooster tailing big chunks of snow from behind us as we were going down the trail.  We rode back to Duluth passing sled after sled heading north and finally separated from Dave and Dale as they elected to head over to Fish Lake and check out the vintage run that was going on there.

I went home, took a little nap and then rode back to the Island Lake Inn for the Yeti Tour celebration dinner.  The inn was packed with a record turnout of riders and their friends and families. There were also prize packages to be auctioned off as well as a number of door prizes and a fabulous pizza buffet.  The night culminated with a brand new four wheeler being given away to the Yeti Tour Raffle winner courtesy of RJ Sport and Cycle and Honda.  As I rode home from another fun and exciting Yeti Tour, a bit of sadness came over me knowing that yet another Yeti Tour was over, kind of like the feeling you get on Christmas after everyone has opened their presents and gone home for the evening.  The good news is that there is still some good riding to be had and before you know it Yeti Tour 11 will be on its way. What new adventures will Yeti Tour 11 bring?  You can find out by signing up to ride next fall at www.yetitour.com. 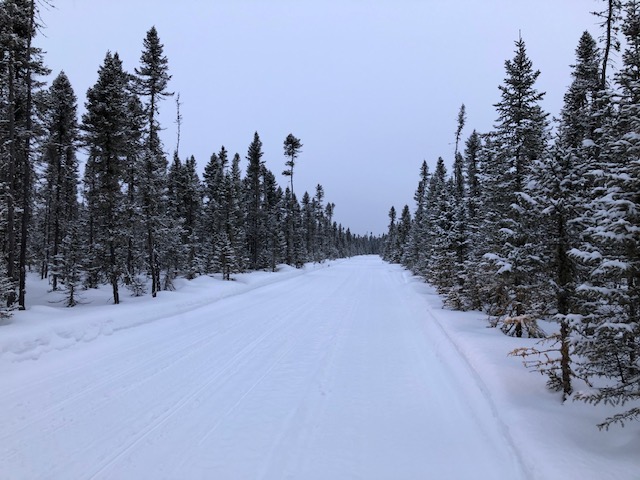 The very cold conditions we have had the past week went a long way in freezing some of the wet and soft spots that have been plaguing the trails all winter. The clubs were able to rebuild and repair the ice bridges and fill in the holes and the trails are about as perfect as they can get- a firm thick hard base with loose snow on top to keep you running cool, our only concern now is the forecasted above freezing temps on tap for the weekend. The Yeti Tour will also be running this Saturday on the North Shore, Pequaywan, Brimson, Yukon and Reservoir Riders trails.