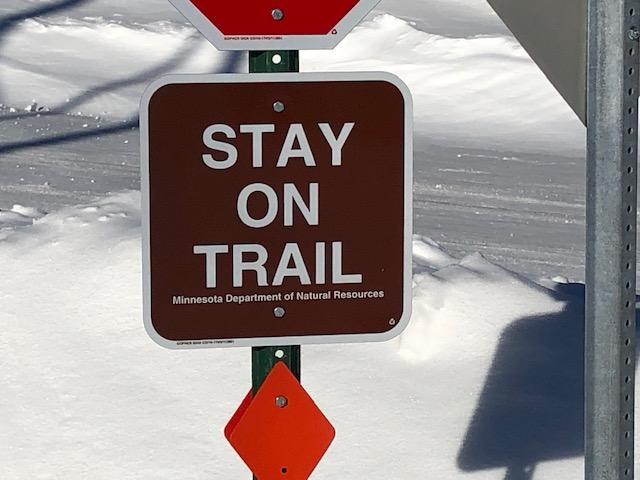 At snowmobiletrail.com we have the privilege of talking to multiple snowmobile club representatives throughout the season about trails and trail conditions and various things that plague the average trail system.  When talking to these different club reps we find that there are common threads that run through multiple clubs and near the top of the list of club complaints are riders that ignore trail signs- primarily the ones that say “Stay On Trail” or “Trail Closed.”  At the tail end of last season a member from a southern Minnesota club shared an E-mail with me that he had gotten from a rider complaining about rock piles in an old farm field.  The rider complained that he had gone off trail through the field and hit a rock pile, wrecking his sled.  He contended that the club should mark these rock piles to keep riders safe.  Now it just so happens that all along the trail going through this field are signs that say “Stay On Trail” The club member informed the rider that is exactly why the “Stay On Trail” signs were there- to keep people out of the field to avoid hitting hazards like the rock pile and because the club only had permission to have the trail through the edge of the field.  Time and time again this scenario is repeated throughout the state- reports of riders going off trail or ignoring trail closed signs and barricades.  Often this results in clubs losing trail access with land owners and trails being closed.  So what exactly does the “Stay On Trail” sign mean?  Those three words mean quite a lot.

One function of the Stay On Trail sign is to protect land owners’ rights.  Most of the time trails pass through PRIVATE PROPERTY and the club has been given permission to put the trail through that piece of property with an agreement between the club and the property owner that only the designated trail path will be used by snowmobilers.  Many times a club has to put up a snow fence to keep people on the trail but that takes time and can be quite expensive, for long stretches (for example a farm field) a series of stay on trail signs should suffice but riders become tempted by that open field of powder, leave the trail, the owner sees that people are now trespassing on his land and then bam- trail closed.

Another function of the stay on trail sign is to protect the rider.  We have several trails in Northern Minnesota that go through areas that have just been logged and although it looks like a clean field of white powder, there are stumps and rocks lurking just beneath the snow that are guaranteed to destroy your sled, the same can be said for certain stretches of power lines or other areas such as swamps, bogs etc. that pose a hazard if you were to venture off trail.  Every year we see riders destroy sleds or worse yet be seriously injured or killed by going off trail in areas that are lined with Stay On Trail signs- they hit culverts, rocks, stream beds or even ride off of cliffs- all because they ignored the sign, and early this season clubs and sheriffs departments were plagued with people that rode past Trail Closed signs and broke through thin ice, costing them thousands of dollars in sled repairs and rescue bills.

So what does the “Stay On Trail” sign really mean?  It is simply a short version of a sign that should say: “Stay on trail or we will lose this easement and this trail will be closed forever, additionally there are rocks stumps ice and unsafe conditions off of the side of this trail that will most assuredly destroy your sled and will cause you to be seriously injured or killed.”  That is what the “Stay on Trail” sign really means- so when you see it- STAY ON TRAIL!