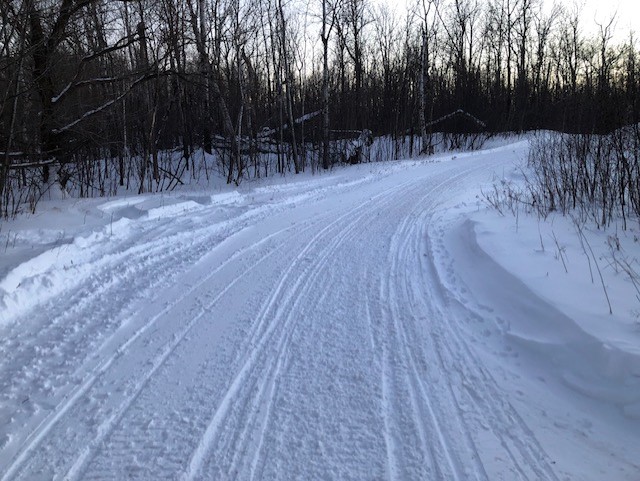 A little bit of snow and a little bit of cold weather has the entire Northeast Minnesota snowmobile trail system in really nice shape.  Most of the wet areas have finally firmed up and ice thickness is improving on the lakes and ponds.  The North Shore of Lake Superior has been hit especially hard with various amounts of Lake Effect snow over the past week, putting snow depth over 2 feet along half of the trail system and allowing the groomers to lay down a very nice trail.  We are also supposed to pick up a few inches of fresh snow Friday Night so the trails will be really fun Saturday morning.  It is supposed to be really cold for the weekend so dress warm.  Also as the John Beargrease sled dog marathon approaches riders are encouraged to slow down and keep an eye out for dog teams out training, especially on the CJ Ramstad North Shore State Trail.  Please remember that the our sport has its roots in the desire of inventors to create a motorized dog sled, in fact the first Ski-Doo was originally supposed to be called the “Ski-Dog” and was billed in their sales literature as “The Motorized Dog Team,” the prevailing theory is that they were having a hard time making the “g” look right on the V shaped logo and the artist just decided to change the “g” to another “o” and the Ski-Doo was born.  In any case let’s be aware of our furry friends out there, we don’t want a repeat of what happened in Wisconsin a few weeks ago.  Ride Safe, Ride Right, Keep Warm and we will see you out on the trail!

As Yeti Tour 2022 approaches on February 26th, I thought it would be a good time to reflect back on Yeti Tour 2021.  I never really addressed it last year as the Yeti Tour wound up marking an abrupt and unhappy end to the 2021 Snowmobile season.  Like most events, Yeti Tour 2021 had to make some adjustments due to Covid.  The first change came with the structure of the fundraiser itself.  With supply chain issues and demand going through the roof, the Yeti Tour was unable to secure its annual raffle prize so the primary funding structure reverted back to the riders taking donations to raise money for the Northland Newborn Foundation.  Additionally the Yeti Tour’s normal base of operations for the beginning and end of the ride, the Island Lake Inn, was only open for limited seating so the big after party was cancelled and registration and ride set up had to be very structured and controlled to maintain Covid protocols.  The one thing that the Yeti Tour was able to do, unlike so many other annual charity events, was to hold the ride portion of the event since it is a self-contained one day ride.

The biggest challenge for any snowmobile event is always the weather and the Yeti Tour has traditionally been a victim of horrible weather conditions regardless of the date:  two years of no snow, multiple years of limited snow, extreme warm temperatures, extreme sub Zero temperatures, rain, the list goes on and on to the point that the running joke is it doesn’t matter what day you pick to hold the ride, whatever day it is the weather will not cooperate, and 2021 followed that infamous Yeti Tour tradition.  Sporadic light snowfall had plagued the season and after a week of above freezing daily temperatures and bright sunshine I had no idea what kind of trail conditions I was in for.  I left my house in plenty of time to ride up to Island lake and was greeted with my first problem, the ditch banging access trail I use to get to the state trail was completely melted, leaving me nothing but frozen dirt to ride on the road shoulder.  Once I got to the trail I was relieved to see that there was a lot of snow still on the trail but my sled was already running hot due to lack of snow in the ditch.  The week’s warm weather and overnight cold had made the trail as hard as a rock and prevented any snow from getting to my heat exchangers.  I immediately thought of the ice scratchers I had on the wall of my garage that I had procrastinated installing all season and now I was paying for it.  Finally I got to the Hermantown trail and unfortunately the section of trail I needed to take to Fish Lake runs North and South and there were huge patches of bare spots which jacked the heat up on my sled even more.  I was finally forced to pull off the trail and let the sled cool down packing my heat exchanger with whatever snow I could find. Finally I reached the Lake and the sled had some relief until I got to the Between the Lakes Trail which was also almost compete dirt. Again the temperature rose on my sled until I reached Island Lake and was able to get some snow back onto the exchangers.

I finally arrived at the Island Lake Inn and registered at the registration booth they had set up outside. Already the morning sun was starting to heat things up and I debated just going home, but I know that the trails I had just taken were a no go so I decided to go on the ride anyway.  I hooked up with my buddy Allen and we departed on the first leg of the ride which took us to the Pequaywan Inn.   The trail suffered from some bare spots but t had also gotten warm enough for the hard frozen trail to become a little bit mushy and throw some snow on the exchangers.  We were still running hot but not to the point that overheating was eminent.   Once we arrived at the Pequaywan Inn Allen’s sled was running really hot and we mutually decided that it was best to just turn around and go home, so we did.  Unfortunately we found out that the rest of the Yeti route had been blessed with a lot of snow and barely suffered any major snow melt, and the riders that stuck it out had a great time.

Allen peeled off to go back to Island Lake and I decided to take the North Shore trail back south to my house where I found large sections of the trail melted off.  I was able to make it home and just like that the season was over.

So far this season we have been blessed with more snow and cold and are almost to the point that the groomers will be able to make a trail that will last the whole season barring any extreme heat and rain.  This year the Yeti Tour is scheduled for February 26th.  The Yeti tour is a great event and is a fun family friendly ride.  You can register and find out more information by visiting www.yetitour.com.