Over its 8 year history the snowmobilers that participate in the Yeti Tour have raised over $200,000 to help newborns and their families.  After a successful 2018 event, some big changes took place.  The Yeti Tour organizers decided to move their fund raising efforts to help a new local organization that directly helps families in Northern Minnesota, The Northland Newborn Foundation.  That was the first big change for the popular snowmobile charity event, the second caught the organizers a little off guard.  The 8 year home base for the Yeti Tour, The Sunset Bar and Grill unexpectedly closed as the business was put up for sale, leaving The Yeti Tour with no home.  Luckily a local venue, The Island Lake Inn on Island Lake, just north of Duluth, stepped in to provide the Yeti Tour with a home.  Having overcome two logistical hurdles, the Yeti Tour was on track and had only one nemesis left to fight:  the weather.

The first Yeti Tour in 2011 went off beautifully, with perfect trails and perfect riding conditions, but that trend was not to last- two years of the ride portion of the event being cancelled due to lack of snow were followed by a year of 20 below zero temperatures which prompted the organizers to move the Yeti Tour to February where it then suffered from three years of record warm temps and melting trails and then a year of good temperatures but exceptionally thin snow cover.  In 2019 we had snow, we had wonderful trails and we had good temps.  When I hopped on my sled Saturday morning it was a comfortable 23 degrees.  I rode to the local trail head to meet my friend Allen and then we high tailed it up to the Island Lake Inn.  The trails were beautiful thanks to the joint efforts of several clubs:  The Duluth Drift Toppers, The Hermantown Night Riders, The Reservoir Riders and the Pequaywan area Trail Blazers.  We arrived at the Island Lake Inn and registered and the ride kicked off at 9:00 AM with a group of about forty sleds.  There was a group of about 10 sleds that would catch up later, a group we refer to as the Fish Lake Crew who come up every year early Friday and rent cabins at the Hi-Banks resort and spend their time out on the lake riding and fishing (they slept in Saturday after a long day of fun on Friday).

We rode out of the Island Lake Inn lot to Island Lake and followed a well-marked lake trail courtesy of the Reservoir Riders club to the Reservoir Lakes trail which the club had groomed the night before to absolute pristine condition.  This large group of sleds reached the legendary CJ Ramstad North Shore Trail and headed north to the Pequaywan Trail.  Initially Allen and I were content being with the group but as is the case very year the large group begins to sort itself out into smaller sub groups that ride together at the same pace.  That is one of the reasons I love riding in the Yeti Tour- the route is mapped out for you but the ride is casual where you can hook up with a group of people that enjoy the same pace and hang out with them the rest of the day.   Another recent development is the ever increasing number of two up riders in the Yeti Tour.  Every year we are seeing more fathers and sons and husbands and wives and this year our first three generation group of riders: a grandson, a son and both grandparents!

When we reached the Pequaywan Trail the group paused to make sure everyone was accounted for.  Allen and I took this opportunity to break away and move ahead of the pack.  We were followed by one of our friends, Dave and his other riding buddy.  The four of us then rocketed off to the Pequaywan Inn where we stopped for a burger and fries and a beverage. 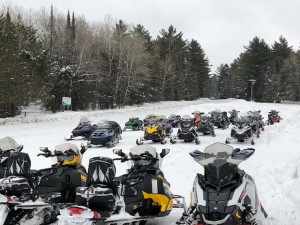 Soon the Pequaywan Inn was overrun with Yeti Sleds

The Pequaywan was soon overrun with Yeti Riders.  Some groups left right away only stopping for beverages, they were followed shortly by Dave and then Allen and I headed out to get ahead of the larger group.  While departing we bumped into the Fish Lake crew who had finally caught up to everyone after getting a late start.  From the Pequaywan Inn we made our way to the Brimson trail but I knew of an old logging road in the area a little way off the trail and asked Allen if he wanted to go explore for a while.  He agreed and in the back of my mind I expected that eventually I would get him stuck in the deep powder we were encountering. 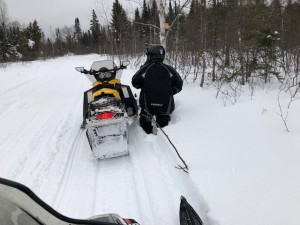 Getting off your sled on the wrong side of the trail

We followed the old road to a large open field and decided it would be wise to turn around and head back toward the trail, it was here that I buried my Indy.  As Allen and I dug out my sled we could hear the large main group going by on the trail off in the distance.  “Well, it looks like you got us worn out and at the rear of the pack,” Allen said.  After more digging, pushing and pulling, Allen decided that we should switch places, he would control the throttle and I would push.  On the count of three he hit the gas and my sled started pulling itself out of its hole, sensing that we were getting out Allen hopped aboard and gunned it, showering me with a face full of snow that shot down inside my jacket, but at least we were out. After a few minutes of getting gobs of snow out of my jacket and facemask while Allen laughed his ass off, we were finally back on our sleds, making our way out of the woods and eventually back to the Brimson Trail.  From there it was off to Hugo’s where we caught up with all of the other Yeti riders and stopped to refuel.  Hugo’s represents the half way point of the Yeti Tour and it seemed that the entire group of fifty sleds refueled there and being at the end of the line cost us quite a bit of time.  With many of the riders deciding to hang out at Hugo’s for a while, Allen and I took advantage of the situation and got out ahead of the group again.  We followed the immaculately groomed Brimson Trail to the Yukon trail and it was off to the John A Brandt memorial Shelter where we were greeted by the Voyageur Snowmobile Club who were hosting a free lunch for everyone on the trail that day.  There were already more sleds at the shelter than we had ever seen and, knowing that there were 50+ sleds on their way, Allen and I decided to leave while the getting was good. 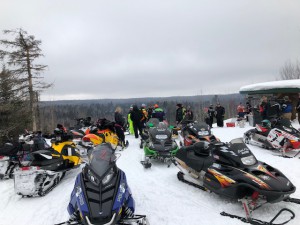 A bonus lunch at the John A Brandt Memorial Shelter

We looped back down to the North Shore trail and had an uneventful but enjoyable ride back to the Island lake Inn for the night’s festivities including the pizza buffet and basket raffle and finally awarding a brand new Arctic Cat ZR 3000 to the Yeti Tour Raffle Winner. From there I rode home with 200 more miles on my sled and another fine day of riding to put into my memory banks. We encourage anyone who wants to ride to join us next year for Yeti Tour #10 in February of 2020 – it promises to be one heck of a good time! 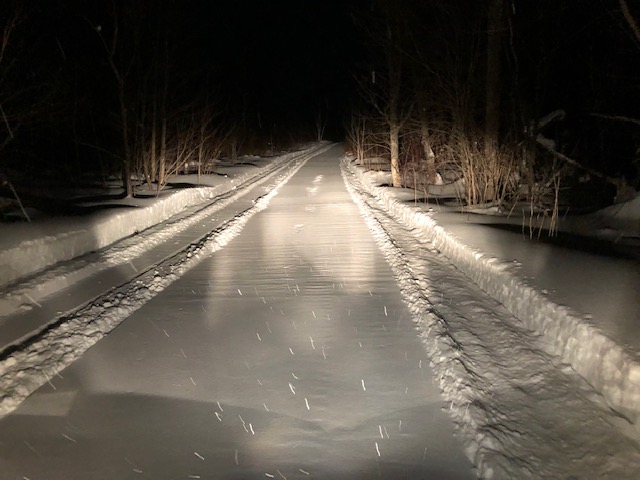 After 4 years of poor snow conditions we are finally going through a “normal” winter.  The Minnesota DNR lists snow depth up the shore at 40+ inches but we call BS on that- there are spots where we measured snow depth at five feet!  Needless to say the trails are excellent but we keep getting snow including a forecast that has snow Friday, Saturday, and Sunday with a chance for more by Tuesday!

Thank you for your patience, we had an issue with the blog that we had to resolve which limited us to trail updates on our facebook page.  We have resolved the issue and we will have up to dat blogs starting immediately!!! 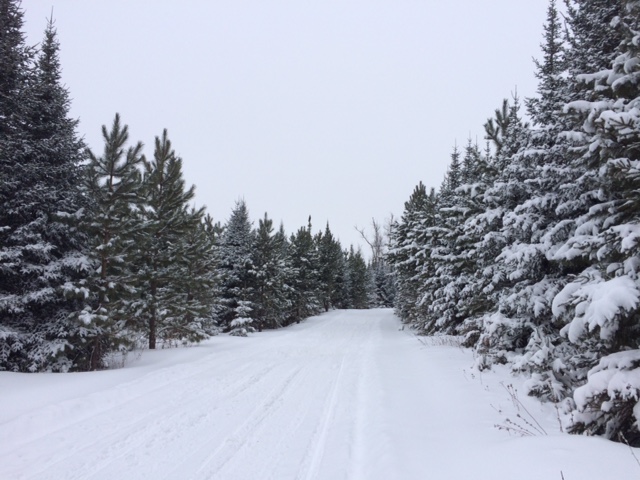