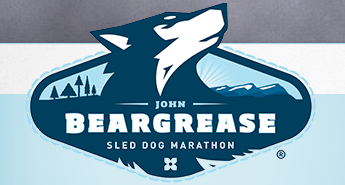 With the annual John Beargrease Sled Dog Marathon coming up this weekend we thought it would be fitting to pay homage to the forerunner of the snowmobile- the dog sled. Canines and humans have shared a bond since prehistoric times, a mutual relationship that has existed since the first humans befriended wild wolves, tamed them and incorporated them into their everyday lives. Some of these early humans developed a love for the colder climates of the world and moved north, brining their dogs with them. These snow loving prehistoric peoples faced the same dilemma we face today- how to efficiently move through the snow. They soon invented the sled and shortly there after one of these enterprising humans tied one of their dogs to a sled and viola, the dogsled was born. For the next several thousand years dog teams moved people, supplies, food, mail and medicine over great distances in the winter through areas that were inaccessible by any other means.

With the advent of the internal combustion engine, many of our modes of transportation like the horse and buggy soon met their demise, being replaced by motorized vehicles. The snow, however, still presented a problem, as there were no reliable vehicles that could easily traverse the great frozen wilderness and reach the remote areas. Aircraft took over some of the duties, but for most things, the dog sled was still the best way to go. Necessity is the mother of invention and several Snow Belt natives began tinkering with ways to conquer the snow. One of these mechanical wizards was a Canadian named Joseph Armand Bombardier. Bombardier’s passion for finding a way to conquer the snow was fueled by personal tragedy. In 1934 Bombardier’s son developed acute appendicitis, he was 20 miles away from the nearest hospital and all of the roads were impassable due to heavy snow. Unable to reach help, Bombardier’s son passed away and a lifelong quest to find a mode of reliable over the snow transportation began. He was successful in creating a large vehicle that could carry several passengers or supplies to those in need but the dogsled was still one of the most reliable modes of transport. By the 1950′s all of that was about to change.

The problem of reaching remote hunting and trapping locations was the driving force behind the tinkerings of the Heteen’s at the Hetteen Hoist and Derrick Shop in Northern Minnesota. In 1954 they created a “powered sled” and by 1956 they were producing these rear engined powered sleds. Meanwhile, Bombardier was experimenting with a small one-person vehicle that could travel over the snow for use by missionaries in the remote reaches of the Canadian wilderness. This vehicle had a forward mounted engine and utilized their new continuous rubber track design. In 1959 Bombardier released the Ski-Dog- it was billed in their sales literature as “The motorized dog team” when it went to production the name on the vehicle was changed to Ski-Doo and the modern snowmobile was born. Now there was a vehicle capable of doing everything the dog team could do. Within a decade, the sled dog team had gone the way of the horse and buggy and the snowmobile introduced the masses to the same type of adventure that had been monopolized by the adventurous mushers of the past. Now anyone could visit the remote isolated winter wilderness that previously had only been seen by a handful of human beings. It is this sense of adventure and freedom that catapulted the snowmobile to the top of the winter transportation hierarchy. 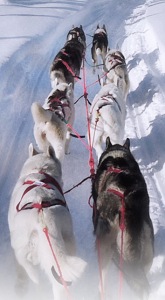 Today the John Beargrease Sled Dog Marathon keeps the tradition of the dog sled alive. Ironically, a large portion of the race is run on the state snowmobile trail, which generally follows the same route that the old sled dog trail used to follow- so one could say that the evolution has come full circle. For a few days we surrender our trail to the panting of the sled dog, echoing not only their history but the history of the snowmobile as well, for without the dog sled paving the way into the wilderness there may never have been the creative spark planted in the minds of the snowmobile inventors of the past to create “The Motorized Dog team” There may have never been a Ski-Dog or a Polaris and we may not have the winter sport that we love so much today.