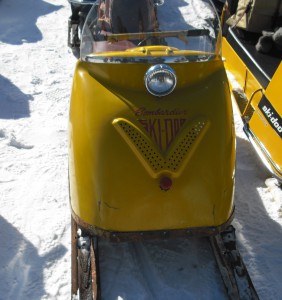 The 1965 Ski-Doo Olympique holds a special place in my heart because it was the first snowmobile I ever drove in my life. It was in the early 1980’s and I had a neighbor, Paul, who was a year older than me and the youngest of five boys. His family owned 3 snowmobiles: two 1972 Ski-Doo Olympiques (a 299cc 15 horse and a 335cc 20 horse) and one 1965 Ski-Doo Olympique that they simply called “The 10 Horse,” referring to its 10hp engine. Paul’s dad had been one of the first people to get on board with the snowmobile movement in Duluth and was one of the first people in town to buy an Olympique when they were introduced for the 1965 model year. There were six kids around my age on our block and we all hung out at Paul’s house in the winter and made constant use of his family’s 3 sleds. The 20 horse was ridden by Paul and pulled a dog sled that carried the three of us that weren’t driving one of the other sleds. Since we were all boys it wasn’t long before the dogsled was quickly renamed “The Sled of Death” and the three of us riding on it spent the entire ride trying to push the other two off as we were going down the trail. The last one remaining won and got to drive the 10 horse, the 10 horse rider got bumped to the 15, and the 15 got bumped back on to the Sled of Death. This was how we ran our ride rotation so everyone got a chance to drive- if you were tough enough. Unfortunately for me the two toughest kids in my school happened to live on my block and I rarely won a match on the Sled of Death. On those days when there were only two or three of us and everyone got to drive, the 10 horse was always the last sled picked. We all thought it was slow and boring. Little did we know that every time we climbed aboard the 10 horse we were climbing aboard a classic piece of snowmobile history that is now coveted by snowmobile collectors around North America. 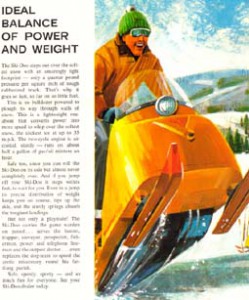 A page from the 1965 Ski-Doo Brochure

In 1965 snowmobiling was still in its infancy. There were only 13,259 Ski-Doos produced in 1965 and one of those wound up in my neighbor’s garage. The 1965 Olympique marked a significant turning point for Ski-Doo. It was the first year that their snowmobiles were actually given model names and the Olympique was the brand’s headliner. Also new for 1965 was the all fiberglass hood that had a big perforated “V” on it to let air in to cool the engine. This was the only year Ski-Doo used this design, 1966 would see the advent of the famous “bubble top” Ski-Doo hoods that became the standard until 1971. The 1965 Olympique came with a 250 cc 10 hp engine and a 3 gallon gas tank. It had a maximum speed of 38 mph although we never were able to approach those numbers. This was the time when snowmobiles were designed for only one thing- getting you through snow, and to this day I have never seen a snowmobile more capable of doing that than the ’65 Olympique. It performed well in all snow conditions- low snow, deep snow, slushy snow- you name it nothing ever stopped that little sled. We often used it to pull the other sleds out when they were hopelessly buried. My neighbors also used the ’65 exclusively in the spring to get their ice house off of the lake as its performance in slush was unmatched. The other advantage this little sled had was that it only weighed 250 pounds. In the rare occasion that the 10 horse did get stuck it was always easy to get it out. The most impressive aspect of this sled was its incredible range. It routinely got more than 40 miles to the gallon, imagine that kind of performance today! The 3 gallon gas tank provided you with about six hours of continuous riding, which was great for us. We would all pitch in on filling a five gallon gas can, fill the 10 horse and be amazed that there were still two gallons of gas left in the can! As is the case with most twelve and thirteen-year-old kids, we were all infatuated with riding something newer, faster and more powerful, never realizing how lucky we were to experience a piece of living history on a daily basis. To us in the early eighties the “10 Horse” was a beat up fifteen year old snowmobile. In 1965 it was the most technologically advanced snowmobile in the world.