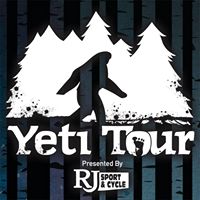 After losing two infants to birth defects Nate and Kelly Alvar became heavily involved in the March of Dimes.  Nate and Kelly are also both avid snowmobilers and in 2010 they hatched a plan to combine their passion for snowmobiling with their passion for helping babies and the Yeti Tour was born.  The first Yeti Tour was held in January of 2011 and with the help of friends, family, sponsors and the snowmobiling community it was a fantastic success.  The following year RJ Sport and Cycle and Yamaha became the presenting sponsors fueling the events growth by enabling the Yeti Tour to raffle off a 2012 Yamaha RS Vector.  Unfortunately poor snow conditions in 2012 resulted in the ride portion of the event being cancelled.  “We thought that not having snow in January was an unusual occurrence for northern Minnesota,” said Nate, “But unfortunately it wasn’t.”  The ride portion of the event was again cancelled in 2013 due to lack of snow. 2014 provided the Yeti Tour with great snow conditions but bone chilling cold making the ride a true challenge of men and machine.  “After no snow in 2012 and 2013 and then subzero temperatures in 2014, we decided to move the event into late February to ensure that we had both snow and warmer temperatures,” said Alvar, but unfortunately Mother Nature didn’t deliver.  With most of the state suffering from historic lack of snow the Yeti Tour was once again in jeopardy of having the ride portion of the event cancelled, but some marginal snowfalls and the work of local snowmobile clubs enabled the ride to go on albeit in less than ideal riding conditions.  Having been a supporting sponsor of the Yeti Tour since its conception, snowmobiletrail.com has always had riders in the event and this year I was once again able to recap the ride for our readers…

The idea of moving the Yeti Tour to late February paid off in one regard, it was a full ten degrees warmer than the previous year- a whopping 5 degrees above zero, much balmier than the previous years’ 5 below and -35 wind chill.  Unfortunately we were still suffering from extreme lack of snow having barely enough to be able to ride.  We had received 2 inches of snow the day before to improve trail conditions slightly but not much.  To make matters worse there was power line work being done and the power company had cleared the snow off of the sections of trail that ran along the power lines.  To avoid this, half of the Yeti Tour Riders decided to trailer to Fish Lake and avoid the first 13 miles of trail, the other half of the riders, including myself, decided to tough it out and start right from the Sunset Bar and Grill, the other major Yeti Tour sponsor and the home of the Yeti Tour Banquet (learn more about the Sunset at www.thesunsetbarandgrill.com).  A group of about six riders left first, shortly followed by my group which was comprised of another twelve sleds.  Having scouted out this section of trail earlier I was elected to lead the group through the construction area and then onto the Hermantown Trail that leads to Fish Lake.  Despite the lack of snow, the Hermantown Night Riders were able to groom once earlier in the week to try to provide at least some semblance of a good trail for us, and all things considered the trail wasn’t that bad, to their credit there is very little you can do with a trail when there is very little snow to work with.

As for my group we cruised down the Reservoir Lakes Trail toward the CJ Ramstad North Shore State Trail.  As with the Hermantown Trail, the Reservoir Riders snowmobile club had been struggling with extreme lack of snow but had still managed to get us a semi decent trail to run on.  Our group once again split into two with the quicker group which I was a part of reaching the gravel pit well ahead of the second half of the group.  It is here that we decided we would go on as two groups of six.  I was teamed up with a group consisting of my old friend Justin, Joe Addy, who was the top fundraiser for the Yeti Tour, and three guys that I had never met before: Shawn, Warren and Chip.  All of us seemed to enjoy a faster pace so off we went.  This section of trail from the gravel pit to the Paquaywan trail is one of my favorite sections of the North Shore State Trail, full of rolling hills and fantastic scenery.  From there we turned onto the Pequaywan Trail which had been very recently groomed by the Pequaywan Snowmobile Club and the ride was perfect, that is until some miles down the trail when I looked behind me to see that that there was no one there.  I turned the sled around and found my group changing out a belt on Chip’s Ski-Doo.  There were fibers of his old belt everywhere.  I also saw that Joe’s Arctic Cat had some recently acquired front and and mirror damage and discovered that when Chip’s belt blew Joe had turned his sled around to help when suddenly a tree popped out of the woods and hit his snowmobile.  This incident gave me the two best quotes of the day:  first that Chip’s Ski-Doo “was so powerful that the belt couldn’t handle it,” and Joe saying that “everything would be fine if it wasn’t for the trees on they put on the sides of the trail.”  We limped on to the Pequaywan Inn nursing Chip’s spare belt as it had a few chunks out of it as well.  Our delay with the belt allowed the rest of our group to catch up to us and the twelve of us pulled into the Pequaywan Inn Parking lot together.  Chip decided the hashed replacement belt wasn’t going to cut it so he loaded his sled onto the support vehicle trailer for a tow down to Two Harbors to get a new belt. Once again one of my favorite things about the Yeti Tour is being shadowed by our support vehicle which this year was manned by Jeremy Dick and the Yeti. The Support Vehicle is there to trailer you home if your sled fails to survive the trip or help out with gas and/ or minor repairs like a new drive belt.  The support vehicle also hauled around the Yeti who stopped at all of the checkpoints for photo ops with the riders and women that happen to be attracted to tall, hairy, smelly abominable snowmen.   The Pequaywan is also a great place to eat and, having ridden the year before, I knew exactly where to sit and what to order- I parked myself down next to the warm birch fire in the fireplace and ordered a burger and beer fries (French fries dipped in beer batter and then deep fried and yes they are as awesome as they sound).

While we were finishing up at the Pequaywan the other half of the Yeti Tour riders arrived.  They had apparently realized that they had taken a wrong turn and got back on track.  Suddenly the Pequaywan Inn was full of snowmobilers and a Yeti taking pictures with the other bar patrons.  After giving them a good deal of ribbing for going the wrong way, the twelve of us in the first group saddled up and rode on toward Hugo’s, the next checkpoint on the ride.  Unfortunately the trail from here had also been not groomed for a while and even though some patches had decent snow, most of the trail still suffered from this years poor snow totals.  We also ran into a bit of a quandary when we ran across a trail that was not on the map that for some reason was groomed and led off into the forest.  This threw us all of and we still aren’t quite sure what exactly that trail was.

Once we arrived at Hugo’s we did our fuel calculations and determined (again with experience from the previous years’ ride) that a full tank from here would get you all of the way back without having to refuel at the Dixie.  This is where we parted ways with Shawn and Warren who decided to make the run south to the Dixie to meet up with Chip who had fixed his belt and was waiting for them there. As we refueled the “lost group” (as we were now referring to them) caught up to us and a good portion of the twelve I had been with decided to tag along with them leaving my group consisting of myself, Joe, Justin, Yeti Tour Organizer Nate Alvar and Nate’s Parents who were doing the entire Yeti Tour on a two up 1998 Indy 500 Touring Sled.  I have to say I admired them greatly for this especially with the poor trail conditions, but Nate’s dad said this was nothing compared to riding two up back in the early seventies.  They definitely took home the hard core dedicated snowmobiler prize for the weekend.

We Left Hugo’s and headed for the Yukon trail.  When we reached the Yukon we saw that the Voyageur’s Snowmobile club had done a bit of trail maintenance early in the winter, pushing back the brush and smoothing things up for when the snow arrived, unfortunately since their trail work practically no snow had fallen for them to be able to groom the trail and we were once again faced with less than ideal conditions.  We still decided to take a quick detour up to the John Allen Brandt Memorial Shelter, which is truly the nicest shelter I have ever seen in my snowmobiling life and totally worth the trip.  After a few photos at the shelter we rode down the Yukon to the North Shore State trail to find it in excellent condition and we had a great ride back to the gravel pit.  It was at the gravel pit that we said goodbye to Justin and Nate’s parents who are both lucky enough to live close to the North Shore State Trail.  Joe, Nate and I made our way back across the Reservoir Lakes Trail which had now deteriorated substantially after a day of local riders using it to make their way to the North Shore State Trail. The Reservoir Lakes Trail is one of the most heavily traveled trails in the state as it links Duluth and Southern Minnesota directly to the North Shore State Trail.  This trail is hard to maintain in good snow years and with such little snow on the ground the task is virtually impossible.  When we reached the fork where we could take the Island Lake Trail that basically runs the length of Island Lake, we decided to take our chances and burn across the lake rather than facing more trail with poor snow conditions.  The Island Lake Trail is beautifully marked by the Reservoir Riders Club and aside from a few ice ridges the trail was a fantastic ride.  Finally we rode back to the Sunset on the Hermantown trail which now was also in fairy tough shape.

We ended the night with a delicious pizza buffet at the packed Yeti Tour Banquet where we capped of the 2015 Yeti Tour by giving away a 2015 Yamaha Viper XTX SE.  Despite the lack of snow the dedicated group of Yeti Tour Snowmobilers completed the ride, raised a ton of money for the March of Dimes and had a great time doing it.  I’m looking forward to Yeti Tour 2016 and am hoping against all odds that we will have an abundance of snow.