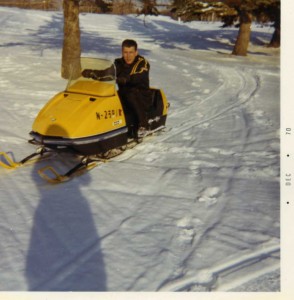 Everything has its time:  the horse and buggy, dirigibles, oil lamps, the dog sled.  But with time comes progress and new inventions.  In 1958 Joseph Armand Bombardier created an economic small single tracked vehicle with a front mounted engine that could easily glide over snow and it changed how we view winter forever.  For centuries snow had been seen as a burden, but now it was eagerly welcomed by scores of people in the north.  Winter was no longer a time to be cooped up inside your home, it was a time for the whole family to get out and experience the gloriousness of the winter world. The snowmobile was an inexpensive way to access this new frontier and snowmobile sales skyrocketed.    Just 13 years after the sale of the first Ski-Doo there were over 100 snowmobile manufacturers and sales climbed to a staggering 495,000 snowmobiles sold in 1971, and more importantly there were over 1.5 million snowmobiles cruising the woods and frozen lakes of the north.  In the early seventies, snowmobile magazines were over 100 pages thick just to accommodate all of the ads. 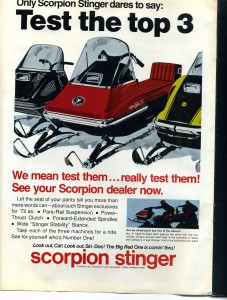 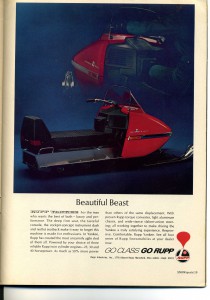 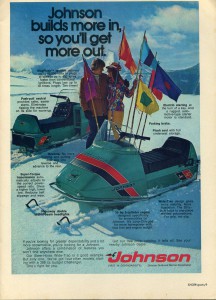 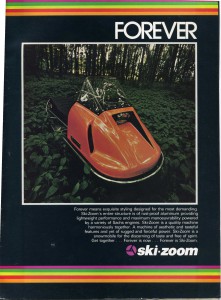 Snowmobiling was on the national news as America’s hottest new trend and all of the industry experts predicted that sales would reach over one million units per year by the late 1970’s.   When sales dipped slightly to 460,000 units in 1972 no one hit the panic button, after all there were now over two million registered snowmobiles on the trails.  1973 saw EPA regulations for noise which meant testing and remanufacturing to make less noisy sleds, the result of this added research expense coupled with the first oil embargo in 1973 resulted in some of the weaker manufacturers closing up shop, as sales dropped to 450,000 the industry still seemed exceptionally strong and the disappearance of many of the fly by night manufacturers was seen as a good thing.  By 1974 gas prices had increased by 300% and the stock market crash tapped into many American’s pocketbook and sales dropped again to 435,000, but with almost three million sleds now out on the snow it seemed that the industry would weather the storm, the one thing it couldn’t weather, however, was the weather.

FROM BOOM TO BUST

Every industry has its growing pains and the snowmobile industry was about to face an avalanche of market forces that would combine to decimate the marketplace.  The 1973 EPA regulations were the first shot, then the oil embargo did its damage, but something else was taking place- saturation.  There are only so many climates that make owning a snowmobile a worthwhile investment, meaning that there were only so many snowmobiles that could be sold. Add to that the emergence of two new recreational vehicles:  The Jet Ski and the new three wheeler ATV’s. Now consumers had more choices and their recreational dollars were going elsewhere.  Finally came the one thing that everyone in the snowmobile industry dreads:  Poor snow conditions.  A few lean snow years and then the second oil embargo in 1979 caught the snowmobile manufacturers totally off guard as sales plummeted to under 200,000 leaving many of them with excess inventory.  With no way to pay their creditors due to lack of sales, snowmobile companies began collapsing and huge industry mainstays like Sno-Jet, Rupp, and Scorpion were suddenly gone.  Other manufacturers that had businesses outside of the snowmobile industry like Johnson, Evinrude, Mercury, Kawasaki and John Deere got out of the snowmobile market.  Even the mighty Arctic Cat went belly up but was revived by its employees banning together and resurrecting their old company. With sales dropping to a low of 103,000 in 1986 it looked like the snowmobile might be a thing of the past.  There was one silver lining in all of this, however, in the mid-eighties there were still over four million snowmobiles being used around the world, a peak number that may never be seen again.  The remaining manufacturers began making higher quality machines with excellent suspensions that could take advantage of what was now a well-established trail system.  When the nineties began with some monster early snow years, snowmobiling experienced a giant resurgence.  Although sales never reached the numbers they achieved in the early seventies, snowmobiles had made a comeback.  Everything has its time and for the snowmobile that time was the early seventies.  It was an exciting time to be experiencing an exciting new sport and today the popularity of vintage shows brings us back to a time when the snowmobile was the undisputed king of the recreational vehicle market.