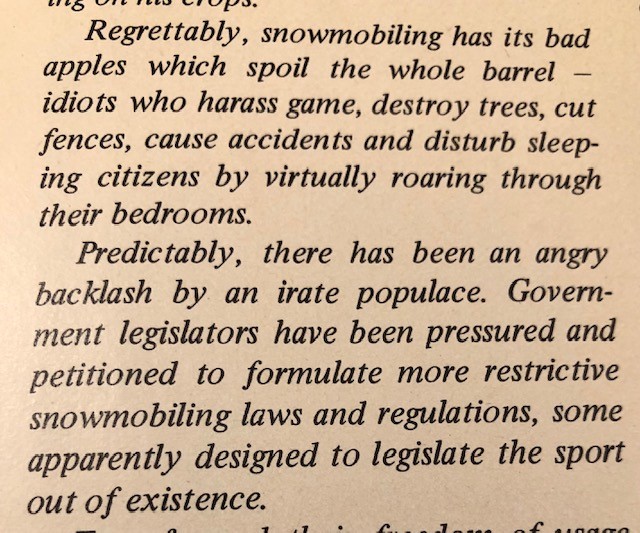 Like many people I collect vintage snowmobile stuff, specifically old snowmobile magazines from the late sixties and early seventies when there were over a hundred snowmobile manufacturers pumping out sleds in the US and Canada.  Magazines as thick as a National Geographic just to fit the fifty pages of ads from the manufacturers!  The other day I was thumbing through the August 1971 issue of Snow Sports magazine, and ran across the article that I took the above excerpt from.  It struck me that here we are exactly 50 years later and this same article could have been written yesterday, in fact we see this sort of story every year when the trails open.  Just like we can’t escape lying politicians, it seems we can also not get away from “that guy” in the snowmobile world.  We see posts from clubs showing snowmobile tracks going right past the “Stay On Trail” and “No Trespassing” and “Do Not Enter” signs that inevitably get trails closed.  We can have a thousand snowmobilers in a row follow the rules but then as the saying goes, “it only takes one bad apple to ruin the bunch” and someone decides the lure of an open field is too great and that’s it, trail closed.  Reading this article it was disheartening to me that the same problems clubs had in the early days of the sport to secure places to ride still haunt us fifty years later.  I hope that this year we can be smarter as a group and that when you see those signs or think about making illegal exhaust modifications to your sled that you think twice about it and don’t be the one guy that gets the trail that thousands of people use shut down forever.