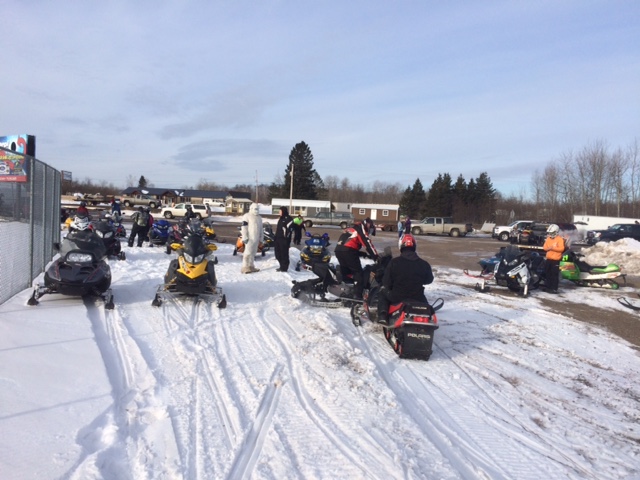 On February 17, 2018 the 8th Annual Yeti Tour to benefit the March of Dimes took place.   The Yeti Tour is a 140-mile snowmobile ride that was created by Nate and Kelly Alvar and a small group of friends who wanted to combine their love of snowmobiling with Kelly’s efforts to help newborns and moms.   Since the first event was held in 2011 it has become one of the premier snowmobiling fundraiser events and attracts a growing number of riders and sponsors despite being plagued by mother nature’s refusal to provide favorable snow and weather conditions on multiple occasions.  This irony was once again played out after this year’s event when upon completion of the festivities on Saturday the 17th it literally started snowing.  Even with all of the weather adversity the Yeti Tour has endured it has still managed to raise over $150,000 for the March of Dimes.  Snowmobiletrail.com has been a sponsor of the Yeti Tour since its inception and once again we rode in this outstanding event, which, as usual, contributed its fair share of unusual occurrences…

The morning started off beautifully, a crisp 15 degrees when I rolled into the Sunset Bar and Grill lot to hook up with my riding buddy Allen and the rest of the Yeti Tour riders.  We were informed before the event that our usual route from the Sunset to Fish Lake was impassable do to heavy logging activity that had stripped several miles of trail of any snow.  Our new route would detour us from the Sunset along the new Rice Lake trail to the Martin Rd. Lot and the head of the CJ Ramstad North Shore State Trail- a familiar trail to those of us at snowmobiletrail.com as our headquarters sits just a few hundred yards from the trail.  Because of this change in route only about 35 riders were starting at the Sunset, another 20 riders were spread out at alternate starting points:  Fish Lake, The North Shore State Trail Head parking lot on Martin Rd, and Billy’s Bar and Grill. This brought the total riders for the event to 55, a new record number of riders for the event. The plan was that the different starting pods would all converge at the old gravel pit where the Reservoir Lakes Trail and the North Shore Trail meet up.  This years event was being documented in pictures and video by Ron Alvar who would tag along on his gear laden 1998 Polaris Touring sled to capture all of the memorable moments.

With Ron’s camera rolling, the Yeti Contingency departed the Sunset at 9:00 AM led temporarily by Jim Bianchi, the president of the Hermantown Snowmobile club, to guide the group of sleds through the trail to Martin Rd.  Part of our new route was also being worked on by Minnesota Power as they were installing new power poles leaving us with a few spots of the trail that had been entirely cleared of snow.

Once we hit the North Shore Trail the group started to fracture into its own little cliques.   One of the things I like the most about the Yeti Tour is the ability to settle in with a group of riders that enjoy your same pace.  The Yeti Tour always seems to fracture into groups like this but this year the spread was almost instant.  My friend Allen and I found ourselves out front with a couple of guys on Arctic Cats who later broke away from us when we stopped to do some helmet venting adjustments.  Although the trail lacked a ton of snow it was incredibly smooth and enjoyable to ride.  We reached the gravel pit where we assumed we would meet up with the Fish Lake crew but were surprised that they weren’t there yet.  We did however meet the Martin Rd Lot guys who had left just ahead of us and had now joined with the two Arctic Cats.  As the Martin Lot group waited for some of their friends from the main pack, Allen and I headed out to the Pequaywan trail, which, true to form so far this year, was phenomenal.  From our first ride of the season the Pequaywan trail has been in amazing condition and the Pequaywan Area Trail Blazers snowmobile club has done what I would say is one of the finest grooming and maintenance jobs of a trail I have seen in recent memory.  On one hand I may regret saying this by inadvertently sending hordes of riders up the Pequaywan trail after reading this but if you ride the North Shore Trail and haven’t been up the Pequaywan you are definitely missing out on some great trail conditions.  Somewhere along the Pequaywan trail I looked in my left side mirror to see who was behind me only to find that it had fallen off somewhere along the ttrail.  It had been loose since earlier in the season when I clipped a snow laden branch with it while ditch banging and now it decided to just fall off.  I have to be honest, I never liked the hood mounted mirrors on the 2015 Polaris Indy anyway- you could never seem to get them into an agreeable position and the way they were situated in relation to the handlebars you always needed to move your hands to see anything and even then, they never wanted to stay in the same place.  (Mini Rant here:  I have a 1999 and a 2000 Polaris in my garage and the mirrors on those older sleds are 10 times better, stronger, more stable and more adjustable than the hood mounted mirrors on my 2015- Come on Polaris- you can do better- heck, go back to your old mirror set up- it is better than the junk set up you have now.  Rant Over.)

We soon arrived at the Pequaywan Inn and were given a warm welcome by the staff and one big wet hairy smelly Yeti who was busy taking his usual photo ops with a slew of admirers.  The rest of the group quickly filled the bar and we found ourselves joined by the Billy’s group and finally the missing Fish Lake group who had gotten a late start.  It is here that we found out that not long after our departure our videographer Ron Alvar blew the driveshaft 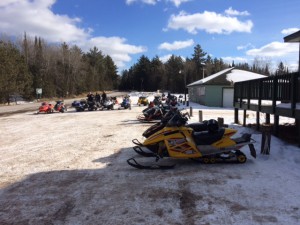 on his trusty old ‘98 Polaris two up.  That and top fund raiser Joe Addy had also had an early breakdown, along with one member of the Fish Lake group whose bogey wheel actually made it farther into the Yeti Tour than his sled did.  It turns out that as the Fish lake group was leaving one of the riders hopped off his sled and went running down the lake chasing his bogey wheel that had come off when a rear axle bolt snapped on his sled, instantly ending his day.  Luckily these  turned out to be 3 of the four casualties of the day and they occurred so early in the ride that our trailing support vehicle had very little to do the rest of the day.

After eating our fill of Burgers and Fries Allen and I teamed up with Nate Alvar (The events founder) and Yeti Veterans James and Jess Carr and we blazed out onto the Brimson trail heading toward Hugo’s, the next checkpoint and the halfway point on the normally 140-mile Yeti Tour Route.  At Hugo’s we filled up with gas and met up with Steve Brandt from the Voyageur’s snowmobile club out of Two Harbors who had come from our next check point, the John A. Brandt Memorial Shelter, where he had started in indoor fire, so riders could go warm themselves while taking a break. 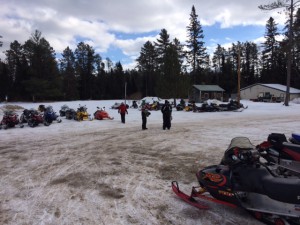 Snowmobiles outside of Hugo’s

James and Jess decided to stay and hang out with another group of riders at Hugo’s but Allen, Nate and myself were anxious to head out to the Yukon Trail, visit the shelter and then do a little extra riding up the Yukon before heading back toward Duluth.  That is another wonderful thing about the Yeti Tour- the ability to detour a little bit on the many trails that intersect with the Yeti route, and that is exactly what we did- ride up the Yukon which as Steve had told us, was fantastic riding.  From there we cut over on the Bear Pit Trail back down to the NSST and back to Duluth, surprised that the trails were still in good shape, but there was so much dirt poking through that at times it seemed more like you were four wheeling rather than snowmobiling.  We got back to the Sunset at a nice tidy 3:30- plenty of time to run home, clean up, and get back to the Sunset by 6:00 for the banquet where we had pizza, handed out door prizes, participated in the Yeti Tour basket raffle (which was a new addition last year and a huge hit again this year) and then the crowning moment of the night where one lucky person won a brand new 2017 Arctic Cat ZR 4000 snowmobile courtesy of the Yeti Tour’s Presenting Sponsor RJ Sport and Cycle in Duluth.

As I left the Sunset pleased with another successful Yeti Tour I laughed to myself as it started to snow- missing the ride by just a few hours.  Over the next seven days the Yeti Tour route received a whopping 22 inches of snow.  How will the weather be for Yeti Tour 2019?  Go to yetitour.com this fall and sign up to ride and find out for yourself!