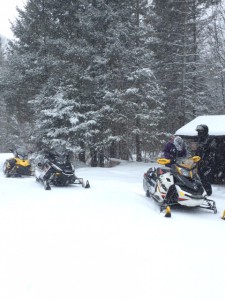 WOW! Today was totally Epic! We were a little ambitious going out today but we couldn’t pass up all of the snow piling up out there. The snow was light and fluffy and we initially sank right down to the dirt in some spots but in other areas there was still an icy base underneath. As the snow kept piling up this soon became a non-issue and we had one of our best day of snowstorm riding in the past four years, putting on over sixty miles- we prob…ably could have done more but we got a pretty late start and had to get back. We did run across a few snowmobile tracks here and there but only saw one other guy on the trail all day-Chris, who had prepped his sled for the summer but like us said he just couldn’t pass up all of the snow. Too bad this is April, maybe some day we could get a day storm like this in December! Since it is April remember that if you do ride STAY OFF THE GRANT-IN-AID trails- they closed April 1st. State trail only!