After riding last weekend we were resigned to the fact that the season was going to be pretty much over, but after getting reports on Thursday that the trails from Two Harbors north were still in good shape we decided to trailer up to the Alger lot and head North from there.  We pulled in at 8:00 AM to find that we were the first to arrive.  I walked over to the trail to see that it had been groomed the night before and that it was soft (not rock hard frozen).  We unloaded and rode to the Yukon, our plan was to head to the Knotted Pine Resort but once we got on the Yukon it was so hard and icy that my temp started skyrocketing. 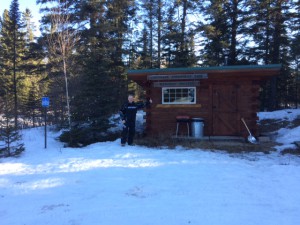 I suggested we head back to the North Shore Trail where the snow was a little more powdery to get into the heat exchangers.  We rode north on the NSST and my temp came under control, Allen, however, insisted on getting back to the Yukon so we took the Yukon spur and started our trip to Knotted Pine.  If last week gave us the best riding conditions of the season, then this week was a close second.  The Yukon trail was absolutely fantastic and we made great time until we got about 6 miles away from Knotted Pine and hit logging activity and a snowless trail.  With snow being crucial in these warm temps we reluctantly turned back, failing to reach our objective.  Still an AWESOME day of riding.  By the time we got back to the lot it was a whopping 44 degrees, and we knew that in spite of the deep snow (as much as 3 feet)  the trails aren’t going to hold up much longer. All in all it was a great way to cap off the season!