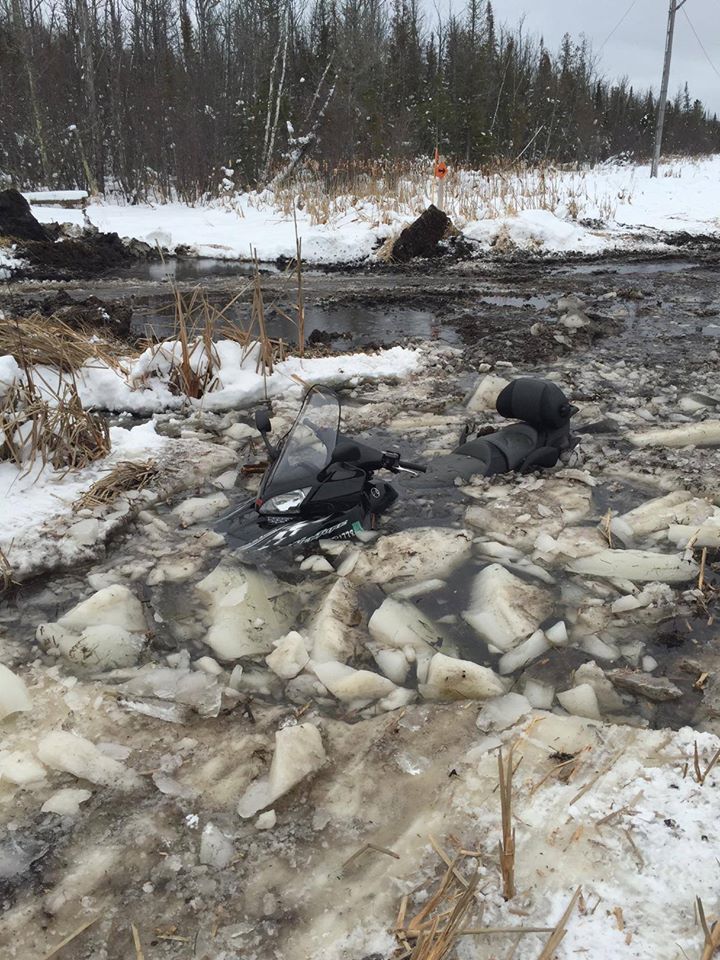 Years ago, my friend was camping with his wife in the Boundary Waters Canoe Area in Northern Minnesota.  They were rowing across a lake back to their campsite after a day of hiking when a storm unexpectedly blew in with rain lightning and high winds.  The once glass calm lake was now a churning cauldron of three foot waves and water was quickly swamping their canoe.  As they struggled against the waves my friend’s wife stopped paddling and started to cry, complaining that she was too tired to continue on.  My friend responded by saying “If you don’t start paddling, we are going to F#$%*&g DIE out here!”  Sensing the urgency of their situation she picked up the paddle and they made it safely to shore.

What had started out as a day of fun and adventure had quickly turned into a life threatening situation.  Luckily they survived and had a great story to tell their kids years later.  If you snowmobile in the mountains or out in the Alaskan or Canadian wilderness you know that there is an element of danger and any snowmobiler with half a brain in their heads take the precautions to have all the necessary avalanche or survival equipment with them, yet every season there is someone that took that one extra risk and went into a sketchy area that unfortunately has their snowmobiling days end permanently, or the one guy who left his beacon behind as he takes one last quick spin or the guy who went out on his trap line and forgot to bring an extra drive belt, we hear these stories every year and they are tragic but we know that there was an inherent risk involved to begin with and sometimes you can be totally prepared and still have things go wrong.

But what about us flatland trail riders?  How often do you think about things going horribly wrong when you pull away from your garage in the morning?  Of course there is always the possibility that you could crash or be hit by some moron on the trail but how often do you think about the possibility of being stranded and having to survive out in the woods?  Again, the risk is always there but it is not something most trail riders think about, but they should, especially in Northeast Minnesota and the snow belt of Wisconsin, the UP and Canada.  For those of us that live on the shores of Lake Superior there really shouldn’t be an excuse for us to leave unprepared.  We should know that the same Great Lakes that are responsible for dumping huge amounts of snow on us are also responsible for sending hundreds of ships and thousands of sailors to their doom with their unpredictable weather and Lake Superior is notorious for giving you lake effect snow that the weather service never saw coming, snow so intense that visibility is cut to zero causing the trail to disappear altogether.

Many of us relish these storms, as we all know there is nothing quite as satisfying as challenging the elements on you sled and very few things top the adrenaline rush you get riding in a blizzard, but sometimes these storms get so intense that the trails become unrideable and people get lost or stranded.  The problem is exacerbated by large swaths of area that are completely devoid of any type of cell service.  Once you are lost or stranded in these areas you are on your own, and there are some places where the weather gets so bad that your chances of seeing another snowmobile fade away to nothing.  In the past several years there have been multiple instances in both the UP and Northeast Minnesota where snowmobilers did not return from a day of riding and search parties had to be assembled to find them, and often times these people were just out for a trail ride and had either gotten lost, or wandered off trail or broke through thin ice or got hopelessly stuck in the deep snow and with the onset of a severe storm were unable to get back to civilization, and it can happen faster than you think.

Just a few years ago there were a few of us that decided to go on a quick afternoon ride up north.  We rode right out of the Snowmobiletrail.com headquarters and it began snowing.  We were having so much fun that we decided to go a little farther and then a little farther still.  Without warning the wind picked up and the intensity of the snow tripled.  With deteriorating visibility we decided it was wise to head back.  On our way the storm got worse and worse and visibility dropped to zero as the sun went down.  Our situation quickly went from fun to a little tricky to now hoping we would make it home safely and we were on a trail we knew well.  I began wondering what would have happened to us if we were from out of town on a trail we didn’t know and got caught up in this storm.  It is something we don’t often think about but should.  At a minimum you should have some food, stuff to start a fire, some water and a first aid kit and a survival blanket packed away on your sled if you are traveling to an area you don’t know.  You never know when your fun in the weekend snow can turn on a dime into a battle for life and death.  It’s better to be safe and to have a good story to tell your kids than to wind up on the front page of the newspaper.