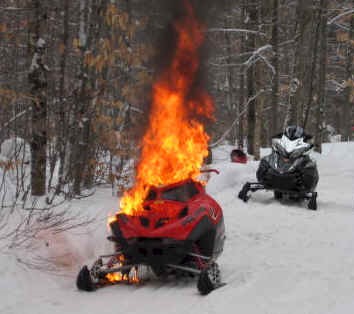 Everybody has a story like this.  You are riding with your buddy and he has gotten ahead of you.  You come around a bend in the trail and see him standing off in the woods with his sled nowhere in sight.  The first thought that crosses your mind is that he has pulled off for a bathroom break, but why is he so far away from his sled? Then you see him limping around, you look down the trail and see his sled off in the trees.  “What’s wrong?” you ask.

“I crashed.  I think I might have broken my leg.” And then comes the question that every guy who has ever crashed anything in his life asks, the most important question of all… “How is my sled?” You walk down the trail and venture into the trees, the taillight is still on which means the sled is still running, you think that’s a good sign.  You go around to the front of the sled and see that it has impacted the tree at a high rate of speed, the front of the sled is missing, pieces of it scattered about in the deep snow, the hood is destroyed, one A arm is mangled beyond recognition and the ski has broken off, the belly pan is in pieces somewhere under the sled, the exhaust is smashed right up against the motor, the steering column is bent and unusable but somehow she is still running albeit with a labored chugging sound, like an engine that is about to die but somehow keeps going.  “Well, how is it?” your buddy asks again.

“Dude, it’s not good.”  Your buddy has finally limped his way over to you ignoring the pain in his leg (he has determined at this point that since he can walk it’s not broken) the next thing you hear is a cascade of obscenities as he sees what’s left of his sled.  He tells you that he came into the corner too fast, thought he was going to hit a tree so he jumped off and threw his sled off to the left hoping to save it.  He still hit the tree with his leg but his plan to save the sled didn’t work out as it shot across the trail and hit a different tree.

He picks up the pieces he can salvage and then you miraculously nurse the sled back to the bar where you are going to have to call his wife to come get you with the trailer anticipating the chewing out you are going to get from her because you are “that friend” that always is there when he does stupid things.

The insurance company determines that the frame is bent and the sled is toast.  Your friends sled is dead.

This is just one way that a sled dies.  Sometimes you have had a sled so long that one day it just gives up and you realize that your years of fixes have finally met their match and the sled is just flat wore out and done.  I had that happen to my 2000 Indy 500.  It was actually my wife’s sled and we bought it from a guy who had a buddy that worked for the Polaris race team.  The guy needed to replace the track and his buddy told him they had left over snocross front and rear suspensions from that year so they modified the chassis a little bit to fit everything and bam you had a snocross sled.  That snowmobile was a blast but years of abuse wore the thing out and when the engine blew up I realized the skid was toast and the frame was also starting to develop some stress fractures.  It was time for it to go.  Then last year I had a relative visiting and she crashed my old reliable two up.  While I was sitting there looking at it in pieces thinking that it was finally time for the sled to move on to snowmobile heaven I started having flashbacks to when I brought that sled home, our first snowmobile at our new house.  I remembered how excited my wife was and how our then ten year old daughter was fascinated with this new addition to our household.  It wasn’t long before she wanted to ride it and then drive it, learning how to ride on that very sled.  I kept looking it over as these memories flooded over me and I flashed back to when I was a kid and my father sold our 12’ Lund boat.  I remembered what I perceived as tears welling up in his eyes and I was in total shock because I had never seen my dad cry, my brother asked him what was wrong and he just said “We had a lot of good times in that boat.”  At the time I thought he was crazy for being upset about selling a boat but now I understood, I couldn’t shake the memories of all the times that my wife and daughter and I had on that sled.  After a few phone calls to some vintage parts places I was able to scrape together everything I needed to bring it back to life and it is still in my garage.  It doesn’t hit the trail anymore but it is still used to haul wood around the property and as an occasional fun sled to ride around the back field when relatives visit.

Just like old cars, old sleds die, some in dramatic fashion while others just fall victim to time and a few lucky ones survive to become centerpieces of vintage shows and serve as reminders of times past.  Maybe that accounts for the popularity of vintage shows, to remember our past and seeing sleds that have survived and escaped the snowmobile grave yard.