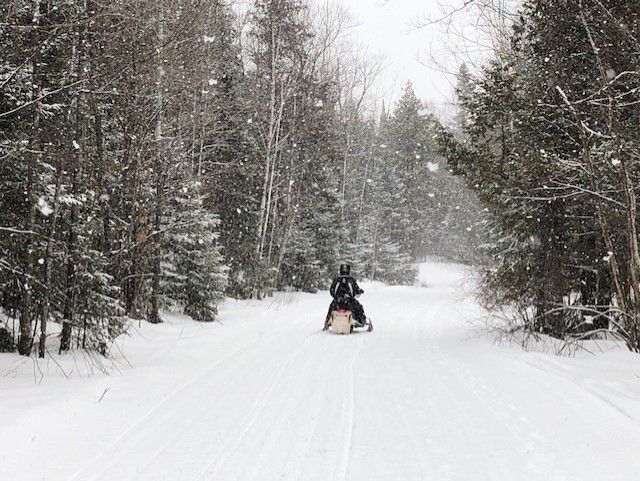 It’s a question that groups of snowmobile trail riders ask every time they go out, “Who wants to lead?”  The leader of a group of snowmobilers is an important position, they set the pace for the entire group and they are also responsible for deciphering the terrain and alerting the group of any upcoming danger or other snowmobilers.  Most of the time the leader is the guy most familiar with the trail, but if you are in unfamiliar territory or the entire group is familiar with the trail the decision gets a little more tricky.  If everyone has equal experience, often times you just swap out leaders as long as everyone is comfortable with the pace, it’s when you get into unknown areas that you want a leader who really knows what they are doing.  In a sense the riders behind the leader are almost like lemmings, they are pretty much going to follow the leaders’ example pace and location wise on the trail.  Sometimes this can lead to disaster.

Several years ago there was a group of riders who were all pretty confident of the trail they were on and also confident in the guy they had leading the way, there were seven guys in the group and all were seasoned experienced riders, they got into a hilly section of trail and the leader had them going at a pretty brisk pace.  As the leader crested a hill he hit a mogul, got tossed off of his machine and abruptly had his sled slammed into by the rider behind him, then the sled behind him hit him, and the sled behind him hit him and so forth until all seven sleds were a mangled twist of wreckage along with several broken bones.  Luckily no one suffered any life threatening injuries but all of it could have been avoided if they were going a little bit slower and the leader was able to see the mogul and slow down the group.  They were overconfident in their group leader and their own riding abilities.

Unfortunately this scenario repeats itself often during the season, which emphasizes how important it is to pick the right person to lead your group.  A leader has to be aware of the rules of the trails, the experience level of his group and must have the ability to keep track of everyone in the group to make sure no one is left behind with some sort of issue. Luckily for us we have a guy in our regular riding group who used to race sport bikes.  He is relatively new to snowmobiling but took to it like a fish in water.  Obviously when you are on a race track on a sport bike you need to be ultra-focused and luckily for us he carried this focus over to snowmobiles.  He has an uncanny knack for reading the trail and setting the perfect pace for the group and avoiding any sort of danger that may lay ahead so we almost always have him lead, which of course, drives him crazy because sometimes he just wants to hang back and ride casual, that is of course until he gets frustrated when he’s not in control.

So remember when you are picking your trail leader to put some thought into it, because the person leading your group might just be the one that keeps your day of fun from turning into a day of disaster.