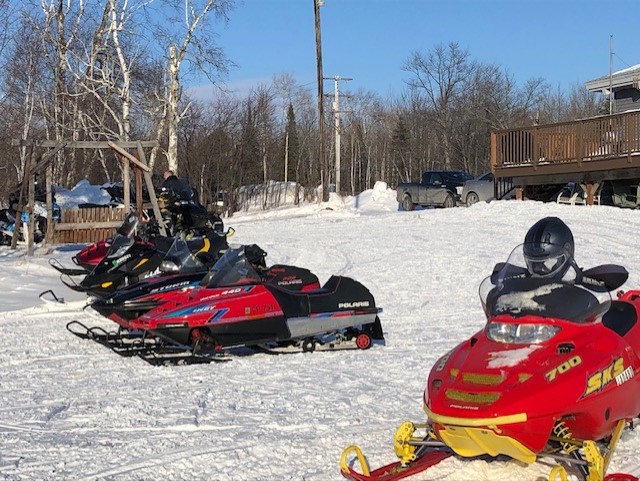 Human beings are strange.  For the past several decades health officials have been trying to get people off of their couches and into the outdoors and it seemed as though they were fighting a losing battle.  The leaders of the snowmobile industry were lamenting the steady decline in snowmobile sales worldwide and the future of the sport was in question, then came 2020, and more specifically the Covid 19 pandemic.  Suddenly, we as human beings were told we had to social distance and shelter in place and that the best thing you could do was sit on your couch and watch TV, so what did we do?  Exactly the opposite.  Now that you were forced to stay home all people wanted to do was get outside, recreational vehicle sales went through the roof and one of the biggest benefactors in this resurgence was the snowmobile industry.  People suddenly realized what a lot of us knew all along:  snowmobiling is fun and a great way to get out of the house and spend time with your family.  Dealers went from having excess inventory to trying to find new or used sleds wherever they could.  Prices went through the roof and supply went to absolute zero.  In spite of the lack of new sleds people still wanted to ride and families across the country went out to their barns and backyards to see if that old Indy 500 they parked fifteen years ago could still run.  Dealers were suddenly overwhelmed with older sleds being brought in for rehab and soon parts for older models became scarce and registrations of older sleds went through the roof.  Overnight the trails were full of old iron and families out enjoying winter.

Enter 2021.  As supply chains slowly start to recover and other types of recreational vehicles are starting to become available the one industry that is still suffering from massive shortages is the snowmobile industry.  Not only did Covid get mom and dad and the kids back out on the trail, it also got them to ride one of their buddy’s newer sleds and made them decide they want one of their own.  The huge surge in preorders and continued supply chain pressure has put the delivery of some new sleds out almost a year from when they were ordered in April of 2021.  With the urge to ride not being filed by the lack of new machines, more the 90’s and early 2000’s era sleds have been showing up on sales sights around the county for prices that a year or two ago were considered outrageous. Sleds that were going for a grand just 3 years ago are going for twice that and if you happen to have a nice sled that has been babied and kept in a nice heated garage its whole life with regular maintenance records and low miles you can charge blood and get it.

With all of these old sleds brought back to life, there are a number of people out there that have taken this opportunity to unload their problems on someone else.  You hear more and more horror stories of the old “It ran great when I parked it” (ten years ago) or “It just needs the carbs gone through” (aka complete rebuild).  Rusted suspensions, dead shocks, blown engines, bent frames, the list goes on and on.  If you haven’t been around sleds a while the best thing you can do is take someone with you who can go over that machine with a fine toothed comb. Tips for buying a used sled can be found in our Northeast Minnesota Snowmobile Blog Archives from October of 2014-

With demand so high there has been another new market that has emerged:  Dead sleds.  Just like old cars in a farmer’s field, people have gone on the hunt for sleds that have good bones but are no longer in running condition.  If you are handy with a wrench you can buy something for just a few hundred bucks and get it back on the trail.  But this too has put pressure on parts houses and nearly wiped out the used snowmobile parts market of all of its inventory.  Now even dead non-running snowmobiles are getting increasingly hard to find.  I recently spoke to a guy who just bought a 22 year old sled with a blown motor who said, “Everything else is there and in good shape and I’d be paying $2,000 for this thing if it was running.  For a few hundred bucks I can get this thing back on the trail.”

THE FUTURE IMPACT OF THE 90’S RESURGENCE

So what will be the fallout of the 1990’s sled revival?   We are already seeing new sled demand increasing as well as a huge demand increase for snowmobile gear but what other effects will this have on the sport?  Most of the side effects seem to be positive:  Registrations of old and new sleds have increased dramatically leading to more money in state trail accounts.  Snowmobile club memberships are on the rise and huge numbers of kids are taking part in snowmobile safety classes.  All of this paints a bright future for the sport but of course there are going to be some negative impacts as well- rising new sled prices as well as rising prices on parts and gear.  Also, in a few years some of these people that ponied up big bucks for a 90’s era sled will find themselves sitting on something worth 20% of what they paid for it.  But for now those of us that have a love affair with the classic sleds will get to see more of them on the trail and at the local watering hole and we will also get to see the next generation of snowmobilers out enjoying the sport and helping keep it alive for decades to come.